Founded in 1630 and known as the Cradle of Liberty, Boston has a rich history and remains a consistently popular tourist destination. One major reason? The city boasts a set of diverse and vibrant neighborhoods, each with its own unique identity and attractions. If you’re planning to visit Boston, we’ve put together this handy traveler’s guide to the Boston neighborhoods.

If you want to truly experience Boston, you need to understand its neighborhoods, their identities, and just where they’re located. Below, you’ll find a convenient Boston neighborhoods map that can help you pinpoint where you are and where you want to be. 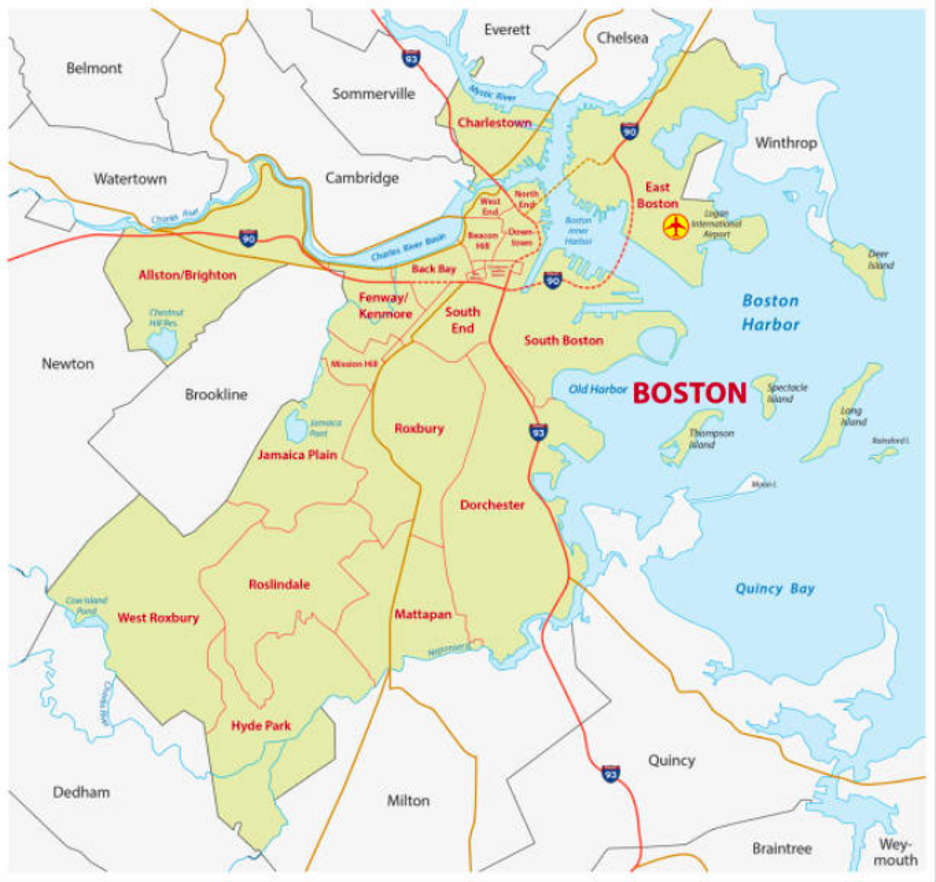 Downtown Boston is probably the most popular area in the city, and it has been that way since the 1700s. Comprised of Downtown Crossing, the Financial District, and Government Center, Downtown Boston also boasts a lively Theater District where you can catch opera, musicals, dance, and more.

North and East of Downtown

In the areas north and east of Downtown Boston, you’ll find the neighborhoods of East Boston and Charlestown. If you’re trying to catch a glimpse of the Charles River or want to get out on the water for a little recreational fun, these neighborhoods are one of your best bets.

In the area west of Downtown Boston you’ll find a few popular neighborhoods that include Fenway-Kenmore, Allston, Brighton, Longwood, and Mission Hill. If you’re looking to experience some fine art, the west is best. Both the Museum of Fine Arts and the Isabella Stewart Gardner Museum is located in this area.

The area south of Downtown Boston is where you’ll find some incredibly lively and vibrant neighborhoods, including Roxbury, Jamaica Plain, Dorchester, Mid-Dorchester, and South Boston.

The outskirts of Boston still have a few neighborhoods that you might be interested in checking out, even though they’re largely residential. These areas include Mattapan, Hyde Park, and West Roxbury.

Where to Stay in Boston

When it comes to the best neighborhoods to stay in Boston, Downtown certainly tops the list. Other popular options include the North End, Beacon Hill, the Seaport District, and Back Bay. These centrally located neighborhoods have a high number of attractions, businesses, and restaurants, which is a big part of their appeal.

If you’re looking for Boston hotels, you’ll have plenty of options to choose from, which is why it’s a good idea to pick the neighborhood you want to stay in before you look at hotels. Here are a few options we recommend:

Parking and Transportation in Boston

The subway, including the Red Line, Orange Line, and Green Line, will take you pretty much anywhere you want to go in the city. You can find out more information about routes on the MBTA’s website.

If you prefer driving, you’ll find that Boston is a pretty car-friendly city, though it’s still a good idea to purchase your parking through a Boston parking app like ParkBoston. You’ll be able to find a parking spot that works for you while getting rid of any parking-related stress. Let ParkMobile help you find parking in Boston today!

Things to Do in Boston

Boston is one of the most popular tourist destinations in the country, and it’s no wonder why. There are countless places to visit in Boston, from museums to ballparks, shopping centers, aquariums, and more. Here are a few of the best things to do in Boston. 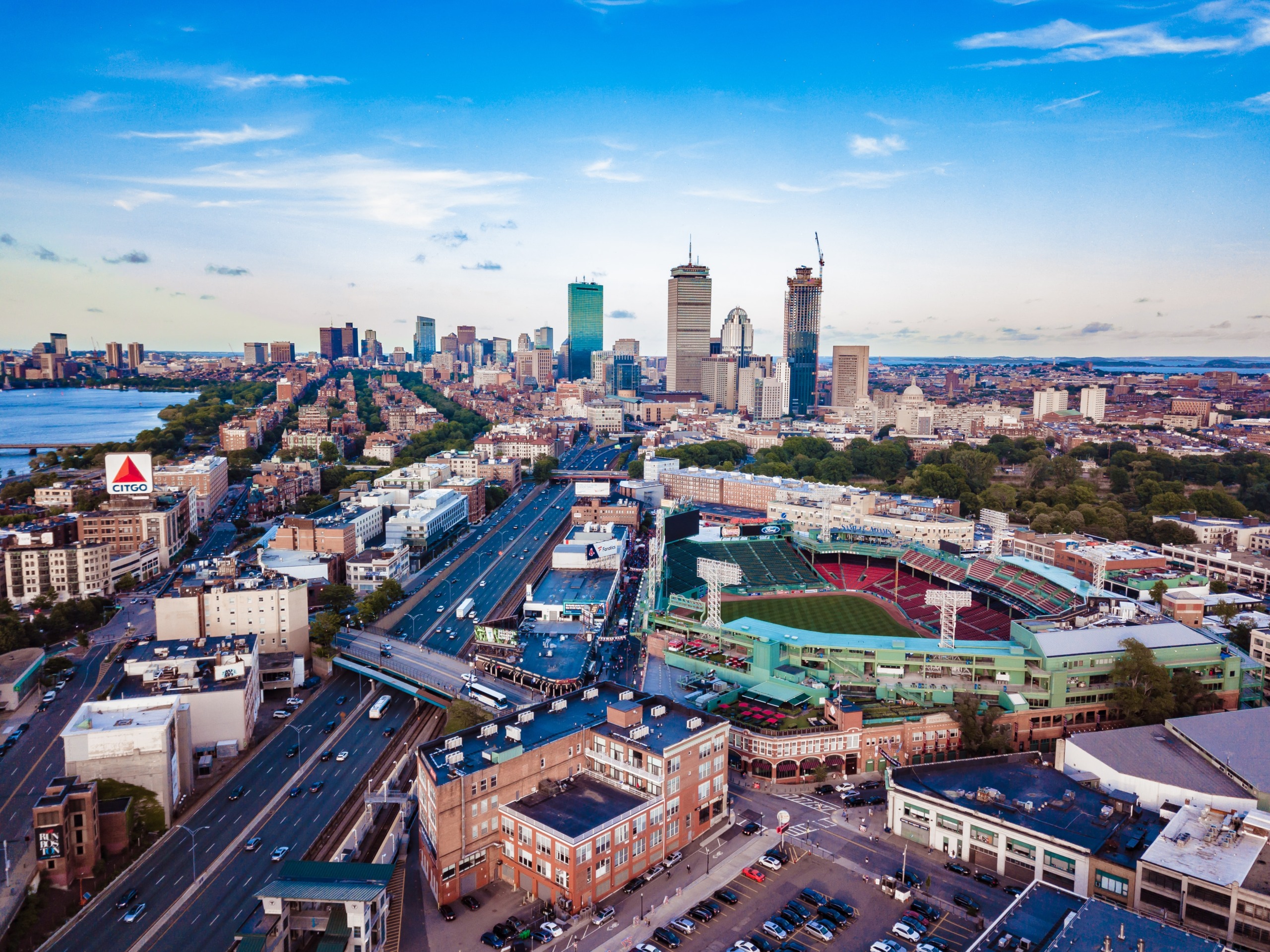 Still have questions about visiting Boston? We’ve brought together answers to some frequently asked questions below.

If you’re planning to visit Boston, it’s a good idea to come between June and October. The summer months are filled with activities, and the early autumn weather is a truly ideal season to experience Boston.

Where to stay in Boston with family?

When it comes to the best neighborhoods to stay in Boston with family, the Downtown area tops the list. You’d also be safe going with the North End, Beacon Hill, the Seaport District, and Back Bay.

Best place to stay in Boston for walking?

If you plan on walking a lot, the Downtown area is a great place to stay, though Back Bay is also centrally located and right next to a ton of great activities and sites.

Cheap places to stay in Boston?

If you’re looking for cheap places to stay in Boston, Airbnb can be a great option. There are also plenty of affordable hotels in the city, including Boston Park Plaza and Hampton Inn & Suites Boston Crosstown Center.

Ring in the Lunar New Year from Coast to Coast

Experience the Best Boston Fireworks on the 4th of July

Parking for the Boston Aquarium