After a successful six-month pilot program, Memphis will now offer Multi-Channel Mobile Payments including ParkMobile throughout the city.

Memphis, TN – January 10, 2022 – ParkMobile, the leading provider of smart parking and mobility solutions in the U.S., announced today the expansion of their mobile parking payment services city-wide in Memphis, TN. The partnership between ParkMobile, Premium Parking; the city’s parking operator of record; the Downtown Memphis Commission, and the City of Memphis began in March of 2021 with a pilot program initiated to help promote the turnover of parking spaces for local businesses while offering drivers a convenient way to pay. After piloting mobile payments in select areas in the Edge District and Downtown, the partnership has been expanded to offer the contactless payment system in over 1,500 on-street parking spaces city-wide. The partnership promotes improved accessibility and ease of use through a robust suite of payment channels at existing on-street legacy meters, including ParkMobile’s app, Premium Parking’s app, or CameraPay’s ‘scan to pay’ feature. 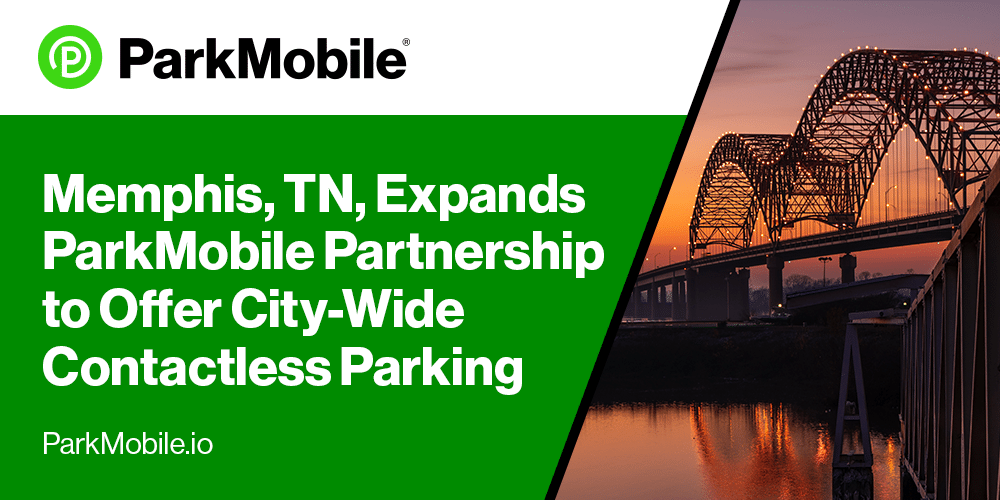 ParkMobile has over 30 million users and is available for iPhone and Android devices, or can also be accessed on a mobile web browser for those who do not want to download an app. To pay for parking using the mobile or web app, a user enters the zone number posted on signs around the parking spot, selects the amount of time needed, and touches the “Start Parking” button to begin the session. The user can also extend the time of the parking session from their mobile device.

“The app was well received in Downtown Memphis and helped ensure local businesses were being supported. We’re excited to continue that momentum around the city.”

The expansion will further grow ParkMobile’s footprint in Memphis, where there are over 31,000 users of the app. ParkMobile is currently available in other Tennessee cities including Nashville, Chattanooga, and Knoxville, and there are over 320,000 users in the state. Beyond Tennessee, the app is available in various Southeast cities such as Atlanta, Birmingham, New Orleans, and Charlotte.

“We initially launched our mobile payment pilot program with ParkMobile and Premium Parking to gauge the public reception to mobile payment parking systems in the City of Memphis. We have been very pleased with the public acceptance of this payment platform and are excited to expand our partnership city-wide,” says Randall Tatum, Administrator/City Traffic Engineer. “The app was well received in Downtown Memphis and helped ensure local businesses were being supported. We’re excited to continue that momentum around the city.”

“It’s great to see the success the City of Memphis had with their pilot program lead to a greater expansion throughout town,” says Jeff Perkins, CEO of ParkMobile. “Looking forward to developing a greater partnership with Memphis and like-minded cities in the future.”

ParkMobile, LLC is the leading provider of smart parking and mobility solutions in North America, using a contactless approach to help millions of people easily find, reserve, and pay for parking on their mobile device. The company’s technology is used in thousands of locations across the country, including 8 of the top 10 cities as well as college campuses, airports, and stadiums. People can use ParkMobile solutions to quickly pay for on-street and off-street parking without having to use a meter or kiosk. Additionally, ParkMobile offers parking reservations at stadium venues for concerts and sporting events. Reservations are also available in metro area garages, allowing people to drive into the city without having to worry about finding parking. ParkMobile has been named to the Inc. 5000, Deloitte Fast 500, Smart Cities Connect “Smart 50,” and the Atlanta Journal Constitution’s Top Workplaces. Additionally, the company won the 2020 Stevie Awards for Achievement in Product Innovation and the 2019 Stevie Awards for Most Innovative Tech Company and Best Travel App. For more information, visit ParkMobile.io or @ParkMobile on Twitter.

The City of Clarksville, Tennessee, Launches a Partnership with ParkMobile to Offer Convenient, Contactless Parking Payments