One of the most iconic baseball stadiums in the world, Wrigley Field is located at 1060 W. Addison St. in Chicago, Illinois.

Wrigley Field is located at 1060 W. Addison St. in Chicago, Illinois. With its distinctive design, you might be able to recognize it all on your own, but if you’re looking for more specific directions, we’ve got you covered.

What part of Chicago is Wrigley Field located?

Wrigley Field is located in the neighborhood of Lakeview on the North side of Chicago, but the area immediately surrounding the park is known as Wrigleyville. 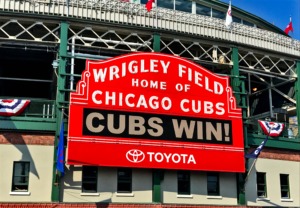 Wrigley Field offers free remote parking at 3900 N. Rockwell St., just east of the Chicago River, as well as free shuttle service to the field. There are also several cash lots and lots for season parking holders, including:

There’s also a well-established peer-to-peer parking market, and limited street parking, if you’re willing to show up early. In general, parking at Wrigley Field will cost you between $10 to $50.

Wrigley Field, located on the north side of Chicago at 1060 W. Addison St. Chicago, IL 60613, is right in the center of the Lakeview neighborhood. Since it’s easy to reach by car, we’ve rounded up a few of the most common routes:

For more extensive directions, you can visit the MLB’s official website.

You’ll have several options for public transportation to Wrigley Field, including trains and buses. Depending on where you’re coming from, you can take the following trains:

A number of bus routes are also reliable ways to get to the game:

Within the park, you’ll find accessible seating located throughout the area, near to elevators and lifts, as well as accessible parking and shuttles to the field.

What was Wrigley Field originally called?

Wrigely Field was originally called Weeghman Park. However, in 1920 the field was purchased by William Wrigley, Jr. and renamed Cubs Park. Another six years would pass before it got its current name, Wrigley Field.

Is the area around Wrigley Field safe?

The area around Wrigley Field, known affectionately as Wrigleyville, is located on the North Side and is generally safe. Filled with bars and nightclubs that are open late, it’s usually pretty crowded.

Indulge Your Need for Speed at the Miami Grand Prix