With a large userbase already in College Station due to ParkMobile’s long-standing partnership with Texas A&M University, locals are already familiar with the convenient parking system. 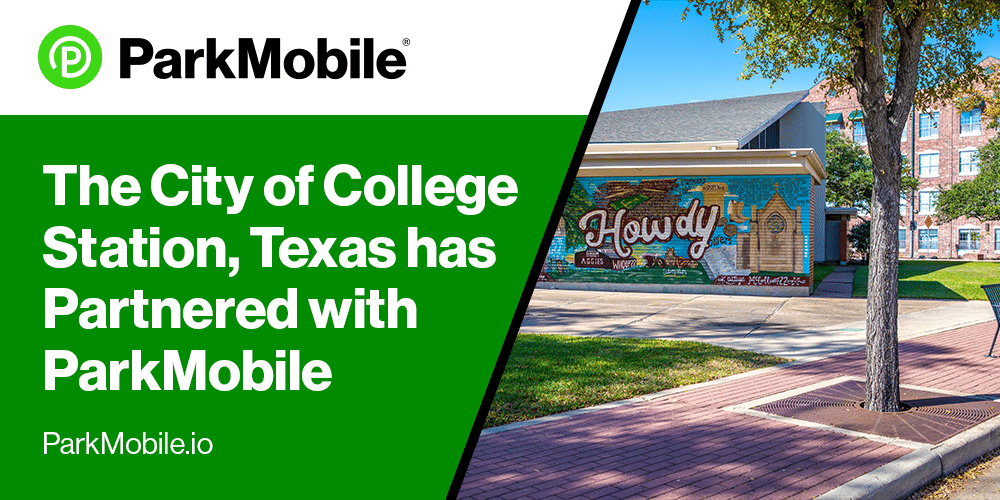 “Our city is excited to be using ParkMobile in Northgate after seeing the platform’s success at A&M over the years,” said Eric Chapman, District Supervisor for College Station’s Community Services. “Creating a better driving experience for residents and visitors is what formed our partnership with ParkMobile, and since launching in October, our payment compliance rate has increased and the number of citations written has decreased.”

Texas is ParkMobile’s most popular state with the most active cities and venues, and almost 1.9 million users. In College Station, there are currently over 47,000 users, though that number is expected to grow with the further integration of College Station. ParkMobile is also available in Austin, Dallas, Denton, El Paso, and Houston and at numerous colleges and universities around the state.

“Creating a better driving experience for residents and visitors is what formed our partnership with ParkMobile, and since launching in October, our payment compliance rate has increased and the number of citations written has decreased.”

ParkMobile has 30 million users across North America, is available for both iPhone and Android devices or can also be accessed on a mobile web browser. To pay for parking using the mobile or web app, a user enters the zone number posted on nearby signs, selects the amount of time needed, and clicks “Start Parking” to begin the session. Users can also extend the time of the parking session on their mobile device.

“Since forming a partnership with Texas A&M, we’ve always seen traction in College Station. Now, we are also available in town, outside of the college campus,” says Jeff Perkins, CEO of ParkMobile. “The expansion to College Station further grows our large presence in Texas.”

About ParkMobile: ParkMobile, LLC is the leading provider of smart parking and mobility solutions in North America, using a contactless approach to help millions of people easily find, reserve, and pay for parking on their mobile devices. The company’s technology is used in thousands of locations across the country, including 8 of the top 10 cities as well as college campuses, airports, and stadiums. People can use ParkMobile solutions to quickly pay for on-street and off-street parking without having to use a meter or kiosk.

Additionally, ParkMobile offers parking reservations at stadium venues for concerts and sporting events. Reservations are also available in metro area garages, allowing people to drive into the city without having to worry about finding parking. ParkMobile has been named to the Inc. 5000, Deloitte Fast 500, Smart Cities Connect “Smart 50,” and the Atlanta Journal Constitution’s Top Workplaces. Additionally, the company won the 2020 Stevie Awards for Achievement in Product Innovation and the 2019 Stevie Awards for Most Innovative Tech Company and Best Travel App. For more information, visit ParkMobile.io or @ParkMobile on Twitter.

City of Fort Worth to Offer Parking Reservations with the FW PARK App Powered by ParkMobile.

The City of Clarksville, Tennessee, Launches a Partnership with ParkMobile to Offer Convenient, Contactless Parking Payments