The Spanish translations are available when a ParkHouston user updates their device settings to Spanish.

HOUSTON, TX – January 26, 2022 – ParkMobile, the leading provider of smart parking and mobility solutions in the United States, announced an enhancement to the City of Houston’s ParkHouston app that will give users access to view the app in Spanish. This new feature makes the app more accessible for ParkHouston’s Spanish-speaking users as the city continues to make parking easy and convenient. 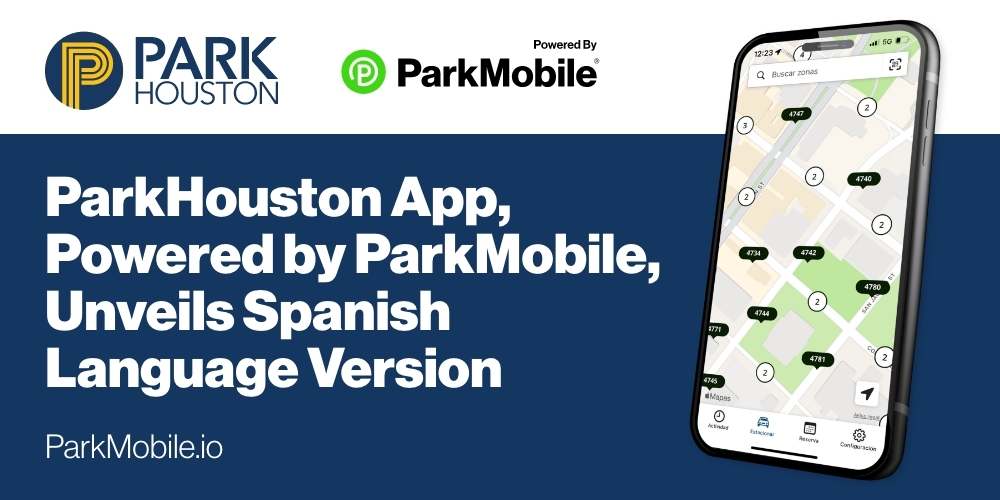 “Houston is the most diverse city in the country, so offering a Spanish version of the app is very important to the City of Houston,” says Tina Paez, Director of Administration and Regulatory Affairs. “ParkHouston wants parking payments to be as convenient as possible for all Houstonians and visitors to our community.”

“Houston is the most diverse city in the country, so offering a Spanish version of the app is very important to the City of Houston. ParkHouston wants parking payments to be as convenient as possible for all Houstonians and visitors to our community.”

ParkMobile and the City of Houston have been in partnership for more than a decade, and the ParkHouston app launched in 2017. Since then, ParkHouston has seen more than 300,000 lifetime users, resulting in more than three million transactions.

The ParkHouston app, powered by ParkMobile, is free to download on both iPhone and Android devices. To view the app in Spanish, a user must change their default language to Spanish (United States) in their phone settings. From there, users can use the app to pay for parking or reserve parking in advance, just as they would on the English version of the app.

“The City of Houston has been an incredible partner of ours since 2011, so we’re thrilled to further our partnership with the addition of Spanish capabilities for the ParkHouston app,” says Jeff Perkins, CEO of ParkMobile. “Providing the option for Spanish in the ParkHouston app is just another way Houston is using innovative technology to create a better experience for all.”

ParkMobile, LLC is the leading provider of smart parking and mobility solutions in North America, providing a contactless way for millions of people to easily find, reserve, and pay for parking on their mobile device. The company’s technology is used in thousands of locations across the country, including 8 of the top 10 cities as well as college campuses, airports, and stadiums. People can use ParkMobile solutions to quickly pay for on-street and off-street parking without having to use a meter or kiosk. Additionally, ParkMobile offers parking reservations at stadium venues for concerts and sporting events. Reservations are also available in metro area garages, allowing people to drive into the city without having to worry about finding parking. ParkMobile has been named to the Inc. 5000, Deloitte Fast 500, Smart Cities Connect “Smart 50,” and the Atlanta Journal Constitution’s Top Workplaces. Additionally, the company won the 2020 Stevie Awards for Achievement in Product Innovation and the 2019 Stevie Awards for Most Innovative Tech Company and Best Travel App. For more information, visit ParkMobile.io or @ParkMobile on Twitter.

ParkHouston’s mission is to provide safe and convenient parking for Houston residents and visitors.  We support economic development by providing superior customer service, investing in cutting-edge technologies, and actively collaborating with stakeholders. As a solution-focused division of the Administration and Regulatory Affairs Department, we service and maintain over 9,500 parking spaces across the City. ParkHouston also works to create more sustainable communities by reducing congestion and supporting alternative modes of transportation.

City of Fort Worth to Offer Parking Reservations with the FW PARK App Powered by ParkMobile.