The company rebounded from the impacts of COVID-19, setting new records for user growth, transaction volume, and revenue while expanding service into hundreds of new locations.

Atlanta, GA – December 14, 2021 – ParkMobile, the leading provider of smart parking and mobility solutions in the U.S., announced today that the company has reached the 30 million user milestone as the business continues to bounce back from the impacts of COVID-19. Year to date, ParkMobile has increased new users by over 130% compared to 2020. Additionally, the company has rapidly expanded availability across North America, launching over 200 new locations over the past twelve months. In June 2021, ParkMobile was acquired by EasyPark Group. 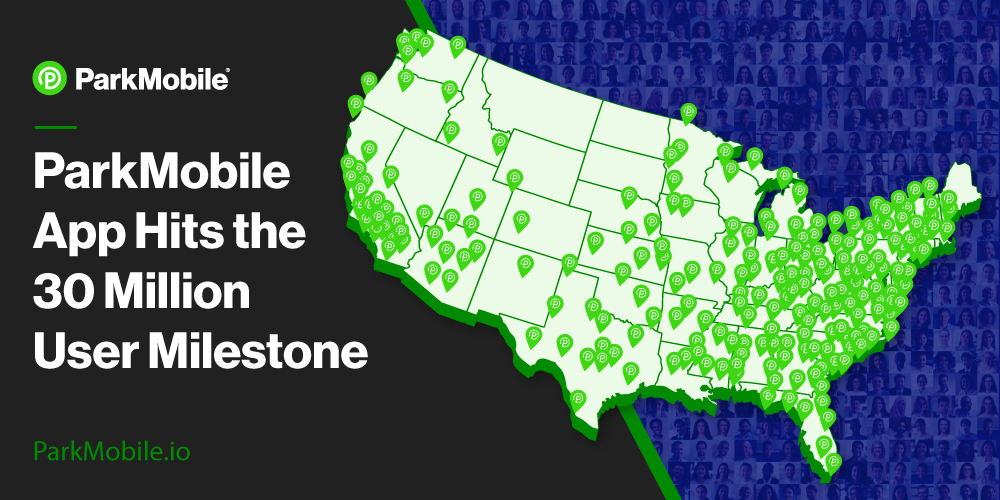 In 2021 ParkMobile introduced several new product innovations, making it easier for people to make contactless parking payments. Earlier in the year, the company launched a new web app with a guest checkout option that allows a user to pay for parking without having to download the full-featured mobile app or creating an account. The company also made it easier to create a ParkMobile account by allowing people to sign up using their Google or Apple credentials.  Additionally, ParkMobile partnered with Google to offer parking payments directly in the GooglePay app.

“2021 has been amazing for the business as we’ve rebounded from the last year, and we’re growing fast once again,” – Jeff Perkins, CEO

This growth and innovation have resulted in ParkMobile and its employees winning several prestigious accolades in 2021, including the Technology Association of Georgia’s IT Leader of the Year, Atlanta Business Chronicle CFO of the Year, the IPMI Marketing Award, and the Stevie Award for IT Department of the Year.

“2021 has been amazing for the business as we’ve rebounded from the last year, and we’re growing fast once again,” says Jeff Perkins, CEO of ParkMobile. “The adversity we’ve experienced over the past two years has made us stronger as an organization, and I am so proud of this team and everything we have accomplished. The future of ParkMobile is very bright.”

About ParkMobile: ParkMobile, LLC is the leading provider of smart parking and mobility solutions in North America, using a contactless approach to help millions of people easily find, reserve, and pay for parking on their mobile devices. The company’s technology is used in thousands of locations across the country, including 8 of the top 10 cities as well as college campuses, airports, and stadiums. People can use ParkMobile solutions to quickly pay for on-street and off-street parking without having to use a meter or kiosk. Additionally, ParkMobile offers parking reservations at stadium venues for concerts and sporting events. Reservations are also available in metro area garages, allowing people to drive into the city without having to worry about finding parking. ParkMobile has been named to the Inc. 5000, Deloitte Fast 500, Smart Cities Connect “Smart 50,” and the Atlanta Journal Constitution’s Top Workplaces. Additionally, the company won the 2020 Stevie Awards for Achievement in Product Innovation and the 2019 Stevie Awards for Most Innovative Tech Company and Best Travel App. For more information, visit ParkMobile.io or @ParkMobile on Twitter.