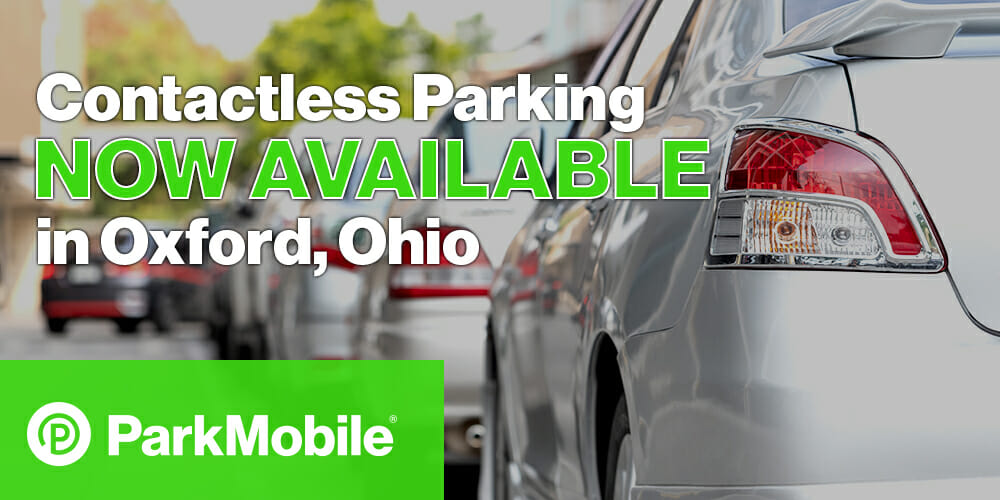 ParkMobile, the leading provider of smart parking and mobility solutions in the United States, has partnered with the City of Oxford to allow residents and visitors to make contactless parking payments through their mobile device. The ParkMobile app will be available at all of the city’s on-street meters, South Main Street parking garage, and the surface lot on North Main Street near the Miami University campus.

“The City of Oxford is pleased to introduce a new contactless payment option with the ParkMobile app,” says Lara Fening, City of Oxford Police Lieutenant. “We want to provide residents and visitors with more options in paying for parking.”

ParkMobile is the #1 parking app in the U.S. and is available for both iPhone and Android devices. To pay for parking with the app, a user enters the zone number posted on stickers and signs around the meter, selects the amount of time needed and touches the “Start Parking” button to begin the session. The user can also extend the time of the parking session on their mobile device without having to go back to the meter.

ParkMobile has a large user base in the state of Ohio, with availability in Columbus, Dayton, Toledo, Cleveland, and Cincinnati. The app is also available at many colleges and universities across the state including Ohio State, Case Western Reserve, and Ohio University. Beyond Ohio, the ParkMobile app can also be used to pay for parking in over 400 cities across the U.S. including, Indianapolis, Chicago, St. Louis, Pittsburgh, and many more.

“One of the additional benefits of ParkMobile is residents and visitors can avoid touching the meter by utilizing the contactless payment app,” says Lara Fening, City of Oxford Police Lieutenant.

“We’re excited to add another great Ohio city to our network,” says Jon Ziglar, CEO of ParkMobile. “We have a large base of users in Ohio that can now avoid touching the meter and use the app to safely pay for parking wherever they go in the state.”

Lakewood, Ohio, Expands ParkMobile Partnership in an Effort to Modernize Parking in the City